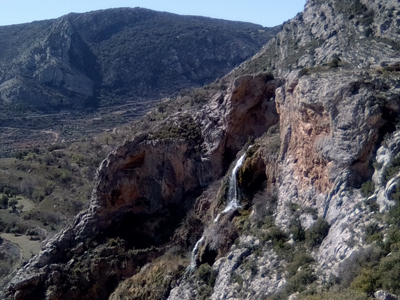 Maestrazgo currently has around 58 municipalities in the provinces of Castellón and Teruel.

With a few exceptions, their economy is mainly based on agriculture and livestock farming.

The village centers of El Maestrazgo are small and located in rugged landscapes, often challenged by large level differences, mountains, gorges, rivers and bare plains. Forests with pine trees and holm oaks alternate with farmland with cereals. Nowadays only the large fields, where large agricultural machines have access, are used while the old "bancales" (plots in terrace construction against the mountain sides) are still only part of the typical landscape of El Maestrazgo and here and there still almond and olive trees cultivated to become. Small trees and small watercourses irrigate the small "huertas" (vegetable gardens) that produce products for their own use while on the banks lush poplars, olmen and other tree species, who appreciate the coolness and the moist environment, grow.

All the forests and plains are dotted with an extensive variety of aromatic plants (thyme, rosemary, lavender, mint, fireworks plant), healing plants (spearmint, tea bush, chamomile, savory) and mushrooms and truffles which later used will be in the gastronomy of the region or be part of a rich assortment of liqueurs.

In addition to this variety of vegetation, the fauna of El Maestrazgo includes species such as the Spanish goat, the mouflon, the mountain cat, the otter, the stone marten, the fox, genet cat, the hawk, the eagle, the little owl, the vulture etc. Here we can even add a few species that can be hunted or fished: the partridge, the quail, the hare, the rabbit, the wild boar and the trout. 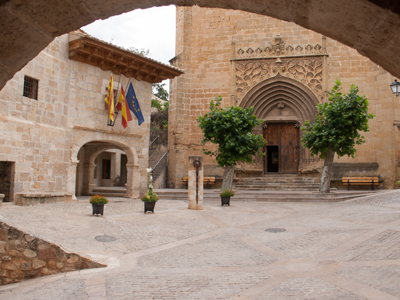 Village at 838 m altitude, just on the border between Bajo Aragon and Maestrazgo. It has been inhabited since ancient times. The "remains of the Molinos man" are proof of this. Oldest excavations done at Aragon (Grutas de Cristal, 5000 years ago) see museum.

The village center has perfectly adapted to the deeply incised orography of the landscape. Barranco de San Nicolas, chasm of 30m.

The buildings of the village have also adapted to the difficult orography and date from the Middle Ages. Molinos is a Templar village reconquered on the Moors in the XIII century.

The Plaza Mayor, with its noble houses, is without doubt the most important monument of the village, as is the council house (late XVI century, Renaissance) where the town hall is located today.

The church Nuestra Señora de las Nieves (XIVe) is also located on this square and is the only example, together with the church of Valderrobres, of Gothic-Levantine style of the province of Teruel. (This whole was declared a historical-artistic monument on a national level!)

All internal and external statues of the church were destroyed during the civil war (1936-39) and the church was used as a granary.

In addition to this important patrimony, we can also visit the "Grutas de Cristal" in Molinos, one of the most spectacular underground landscapes in Europe.

Knights Templar village, declared artistic, historical whole. At the top of the Salto de San Juan (waterfall) you can find graves, probably from the Visigoths (VII to IX century). Probably only important people were buried here. Above this waterfall is the Ermita de San Juan.

The name of this village should indicate the presence of a large number of caves. (eg primitive shelter of the monastery of the Servitas near Ladruñan, prehistoric rock paintings of ancient peoples near "la central eléctrica") 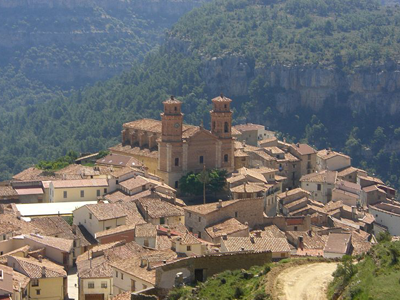 Old walled Knights Templar village, situated on top of a mountain (1130m) and plagued by the rivers in the middle of a geological landscape. This location was chosen from a military point of view because of the promotion of the safety of the village. From the "Balcón de los Forasteros" we can see the valley in all its splendor and we see how some houses hang over the cliff above the canyon of the Rìo Cañada.

The two most important buildings of the village are located on the Plaza Mayor (Plaza de los Tablas). 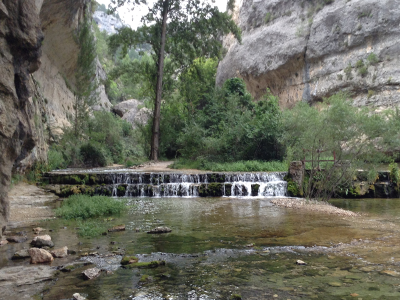 The church Santa María del Rosario (XIX) is perhaps the most important monument in the artistic field, the origin of the river Pitarque is the most spectacular thing that nature can offer.

After a pleasant walk (+/- 1H) along the bank of the river through a shady and fresh gorge, richly covered with climbing plants, maples, hazel and wild strawberries, we are surprised by the water that spouts out of the cliff. After the winter or after heavy rainfall an extraordinary spectacle in view of the large amount of water. (la chiminea!)

Trouts and otters live in the cold (8 to 10 ° C.) and pure water of this mountain-river. 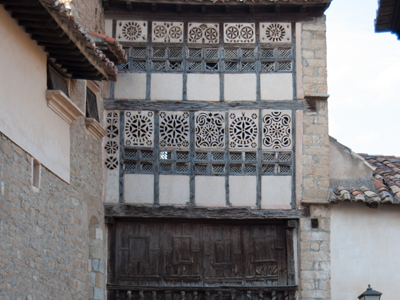 Small village at 900 m altitude, walled with medieval ramparts and declared a historical-artistic whole and received the prize Europa-Nostra for its restoration works. The ramparts are perfectly preserved and we can distinguish a few round turrets and 5 portals. The gate of the nunnery "Puerta de las Monjas" with its carved jalousies in Mudejar style, is located next to the monastery founded by Felipe II. Within the city walls Mirambel surprises us with a few elegant houses with impressive and richly carved overhanging eaves of Neapolitan-Aragonese style, again indicating the influence of the flourishing woolly zeal of the XV to XVIII th. The houses Zorita, Pastor, Aliaga, Castellot and the town hall are remarkable buildings. One of the few wall paintings from the Renaissance that exist in the province of Teruel can be found in the house Costeras. The parish church, dedicated to Santa Margarita, is the most important religious monument (XVIII e.). Some stone shields in facades indicate the presence of the Templars in this region in earlier times. In this region was the film "Land and Freedom" by Ken Loach about the civil war of Spain (1936-1939) ? Name comes from the castle built by the Templars (XIII) and completely destroyed by the last war of the Carlists in half of the XIX e. Now back in construction and it is certainly worth it to walk upstairs and visit the ruins of the castle. At the foot of the castle we find several buildings with architectural importance:

- the parish church of San Miguel, Gothic XIV
- Ermita (chapel) Virgen del Agua, XVII
- town hall, original construction next to a source under a portal with images of human heads and a praying character
- lavadero with a toilet one of the few

Just outside the village center, the Ermita del Llovedor (XVIII-XIX e.) Hangs between the high steep limestone cliffs. Spectacular are also the banks of the reservoir of Santolea. Beyond this reservoir are the most fertile soils of all Maestrazgo, irrigated by the Rio Guadalope (green vein of the region). The dam was built in 1928-30, so that the village of Santolea was largely overwhelmed and disappeared beneath the lake.

You can swim at different places in the clear water but swimming close to the dam is forbidden. Alcorisa is a village 15 km from Molinos. Located at an altitude of 632 m. The church "La Virgen de la Asunción" was built in several phases, the construction work started at the end of the 14th century. The bell tower is from the 18th century in which Mudejar style is incorporated.

Alcorisa is one of the villages that take part in the "Ruta del Tambor y el Bombo" during the Semana Santa (the Easter week).

The main event takes place on Thursday night at 12 H at night when hundreds of people start to drum together on the village square ("rompida de la hora").

Luis Buñuel was born in Calanda in 1900. One of the greatest Spanish filmmakers to this day. The "Centro Buñuel Calanda (CBC)" was inaugurated in 2000 and is still regarded as the country's largest cultural center about the life and work of the film maker. There is a permanent museum, a temporary exhibition space, a cinema room and a research center related to Buñuel.

But the village is not only known for its most famous inhabitant of the twentieth century, it is also a village with an enormous architectural value with its Plaza del Pilar de Calanda, and the Casa Museo Miguel Pellicer, its village square with round arches and covered galleries and the Acueducto de Los Arcos.

In Calanda the drummers start on good Friday at 12H in the afternoon. 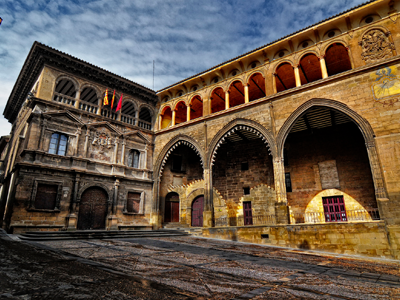 Alcañiz is the capital of Bajo-Aragon. The castle dates from the XII, XIII and was of the order of the Calatravos. Inside are Gothic murals of the XIVe. One can visit the "Parador" as well as his restaurant. The ex-collegiate church Santa Maria la Mayor is a large baroque church with a beautiful façade. (XIXe). Under the village square there are centuries-old subterranean tunnels that one can visit. The city center has pedestrian shopping streets and nice, tasty eateries. A few kilometers outside the city one can go swimming on the lake of Alcañiz. A little further away is Motorland, a GP circuit where you can also go karting. 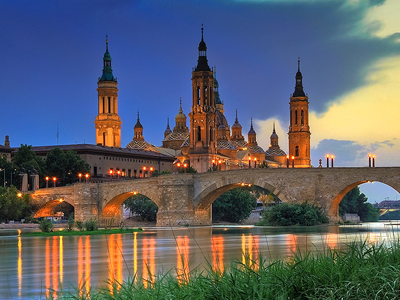 This well-known and loved city, on the river Ebro, has many assets. (130 km from Molinos).

Some beautiful monuments are:
- El Pilar (the Pilar Cathedral), decorated with paintings by Francisco Goya.
- La Seo / Catedral del Salvador; a fusion of Baroque styles, Romanesque styles and Moorish influences.
- Palacio de la Aljafería (Palace): This palace, built in the 9th century by the Arab king Al-Muqtadir. Today the seat of the government of Aragon
- Goya Museum-Ibercaja Collection: a museum dedicated to Goya.

The square in front of the Pilar Cathedral is one of the largest squares in Europe with a length of 1500 meters.

In addition to this rich cultural offer, Zaragoza is an atmospheric, pleasant city for shopping and nice terraces. 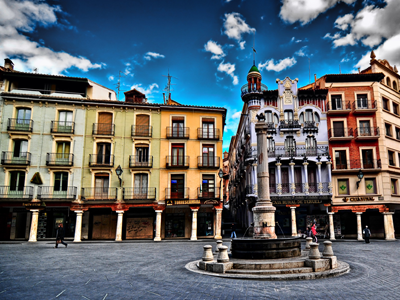 Is the capital of the province of Teruel. (At 115 km from Molinos). This sparsely populated provincial capital of Spain is mainly known for its raw ham, and for its mural art, recognized by UNESCO as World Heritage.

The sights, the mausoleum of the Lovers of Teruel, the paleontological center of Dinópolis and the surrounding nature are a must for culture lovers.

The church of Santa María, the cathedral of the diocese of Teruel and the towers of El Salvador, San Martín and San Pedro are highlights in the mudejar art. 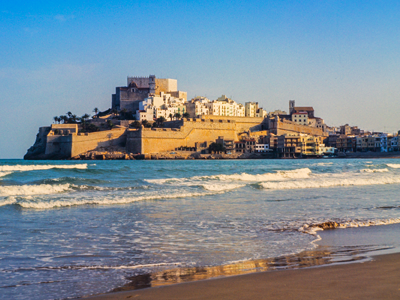 Is a coastal village that is only connected to the mainland via a strip of sand. This peninsula is 120 km from Molinos.

On top of the peninsula you will find an old castle. The road to this castle is a nice route through tiny medieval streets, past small houses with beautiful balconies full of flowers. The small market stalls provide a nice atmosphere. You can enjoy good food in the many restaurants.

The beaches are beautiful and Peñíscola has become the favorite beach resort of many.